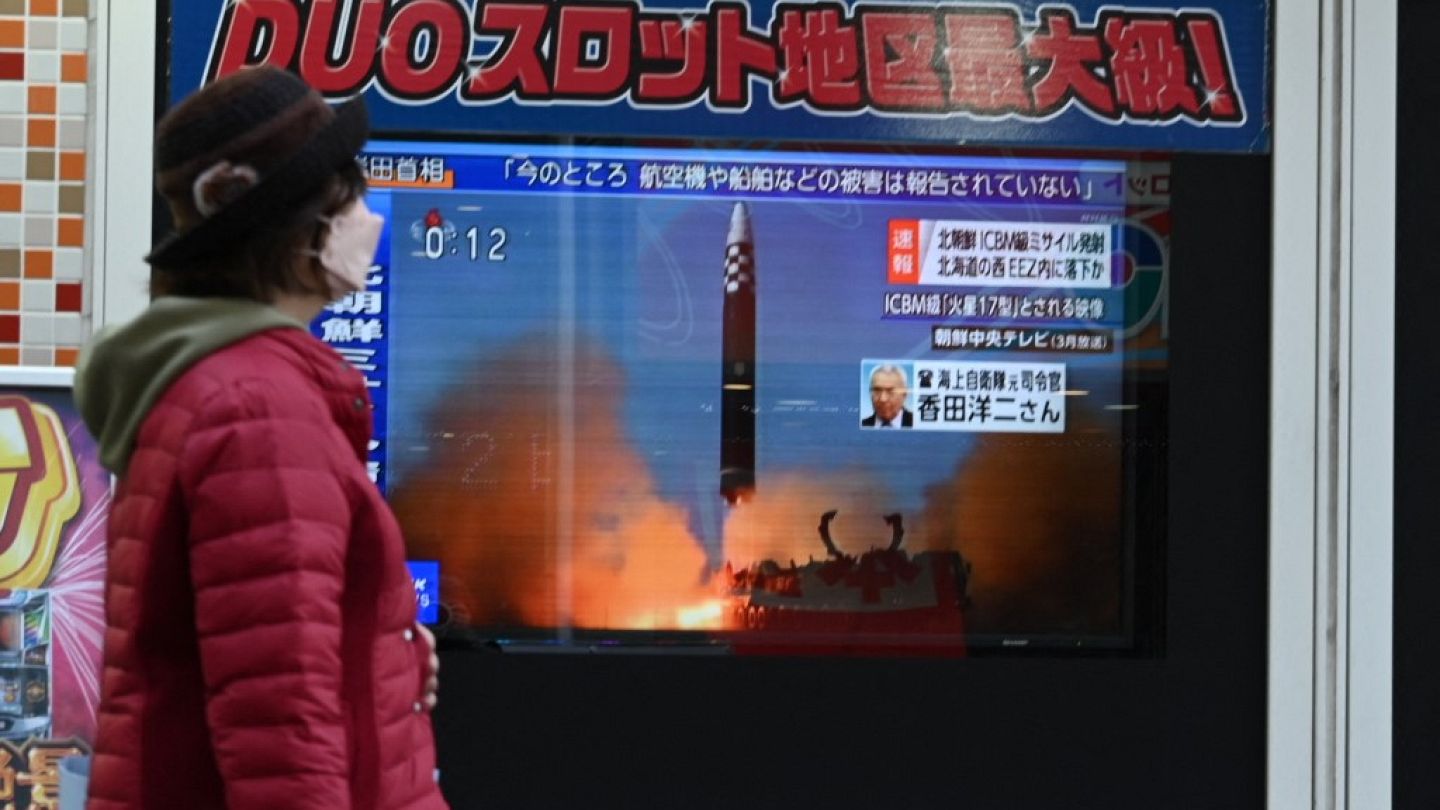 North Korea launched an intercontinental ballistic missile (ICBM) Friday that fell off the coast of Japan, the latest in a record-breaking series of missile launches in recent weeks, as Seoul, Tokyo and Washington expect an imminent nuclear test from Pyongyang.


The South Korean General Staff "detected a suspected long-range ballistic missile launched at around 10:15 a.m. (0115 GMT) from the Sunan area in Pyongyang toward the East Sea," it said, referring to the Korean name for the Sea of Japan.


Tokyo said the missile had traveled about 1,000 km and that Japanese forces had not attempted to destroy it in flight. Japanese Defense Minister Yasukazu Hamada said the projectile had reached a maximum altitude of 6,000 km, and deduced that it was an "ICBM-class ballistic missile, although further details are being analyzed. The ballistic missile launched by North Korea seems to have fallen in our exclusive economic zone off Hokkaido," the large island in the north of the Japanese archipelago, said Japanese Prime Minister Fumio Kishida.


This is not the first time that a North Korean projectile has ended up in Japan's exclusive economic zone (EEZ), which is the maritime space that extends up to 200 nautical miles (370 km) beyond the coast of a state, between territorial waters and international waters.


North Korea "is repeating provocative acts with unprecedented frequency. We strongly reiterate that this is absolutely unacceptable," denounced Fumio Kishida.


The White House has "strongly" condemned the shooting, which it says is "a blatant violation of multiple UN Security Council resolutions and unnecessarily raises tensions and risks destabilizing the security situation in the region.


On November 3, North Korea had already launched an ICBM but that launch apparently failed, according to Seoul and Tokyo. The country had broken a self-imposed moratorium in March on launches of such long-range missiles in 2017. Earlier this week, North Korea's foreign minister promised a "fierce" response to the strengthening security alliance between Seoul, Tokyo and Washington.


During a meeting on Tuesday on the sidelines of the G20 summit in Bali, U.S. President Joe Biden asked his Chinese counterpart Xi Jinping to intercede with North Korea to stop the escalation and renounce carrying out a nuclear test, as Washington and Seoul are planning to do. Joe Biden, his South Korean counterpart Yoon Suk-yeol and Fumio Kishida also promised on Sunday a "strong and firm" response if Pyongyang carries out this test, which would be the first since 2017 and the seventh in its history.


Pyongyang conducted an unprecedented flurry of launches in early November, including a missile that fell near South Korean territorial waters for the first time since the end of the Korean War in 1953. President Yoon denounced a "de facto territorial invasion.


November 2 alone saw 23 North Korean missile launches, more than in all of 2017, when leader Kim Jong Un and then-U.S. President Donald Trump threatened each other with nuclear apocalypse. In September and October, Pyongyang had already carried out a copious series of launches, including a medium-range ballistic missile that flew over Japan for the first time in five years.


Pyongyang justified its show of force in November by the "aggressive and provocative" attitude of Seoul and Washington, which were conducting at the same time the largest air maneuvers ever carried out between them, including stealth aircraft and strategic bombers.


Analysts believe that North Korea, which under U.N. resolutions is prohibited from launching ballistic missiles, has become emboldened by the likelihood of escaping further U.N. sanctions because of divisions in the Security Council, where China and Russia are blocking any U.S. attempt to do so.

COP27: blockage on the financing of "loss and damage" demanded by the countries of the South